This beautiful Federal-style house, built in 1810 by Giles Griswold, served as a private home, public house, and inn during the next 164 years until the town of Burlington purchased it in 1974. It is now listed on the National Register of Historic Places. 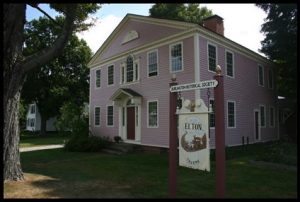 Early stagecoach lines ran through the Farmington River Valley, up the steep hill into Burlington, then through Harwinton and into East Litchfield where they crossed the Naugatuck River for the final climb into Litchfield. Burlington became one of a number of way stations along the Hartford to Litchfield route.

The Tavern building was constructed as a private home. It later included a commercial establishment – important both to the local citizens and, especially, to those traveling along the Turnpike. Still later it reverted to a private home. Although unproven, it is believed that the prominent Waterbury architect David Hoadley was the Tavern’s designer. Its style is transitional as the building exhibits both Georgian and Federal details; it is a fine and somewhat unusual example of both periods. It retains the formal Georgian symmetry but the building’s gable end faces the street, with the front entry centered and the chimneys placed on opposite roof slopes. The large window above the entryway, with its pilasters, frieze and arch, is an interesting rural interpretation of the Palladian style window. The second floor ballroom, with its unique barrel vaulted ceiling, encompasses the entire width of the building façade.

Early books and articles referred to the building as the “Old Brown Inn”- perhaps because of the aged, weathered color of the building, as no evidence has been found that a person named Brown was an owner or proprietor. The building has become known as the “Elton Tavern,” largely due to the long occupancy of Romeo Elton, a distinguished resident of Burlington. Over the years many owners came and went; the names of those who lived in the Tavern are indicated below in bold type.

Burlington merchant Giles Griswold (1780-1838) owned a small store on the north side of the turnpike in the then center of town. In 1806 and in 1808 he purchased two parcels of land diagonally across the road from his store. In 1808 he sold the store, using the proceeds to construct a large dwelling house on the road known today as the George Washington Turnpike. The Town of Burlington first taxed the property in 1810: a house with seven fireplaces – more than any other in town at the time – quite an impressive structure!

In 1813, Giles married Sylvia Pettibone (1796-1849) and she moved into the house. She was the daughter of Col. Theodore and Mary Humphrey Pettibone. Together Giles and Sylvia had ten children – two were born in the home; one died there. Unfortunately for Giles Griswold, and many other New Englanders, times were hard. The year 1816 would later be known as the “year without a summer” due to the volcanic eruption of Mt. Tambora in Sumatra. Unusual climatic aberrations ensued, including freezing temperatures in June, July and August. Crops were ruined, livestock suffered and many families were close to starvation. Giles left Burlington in 1817 to seek to restore his fortune. He first went to Georgia, then years later to Brooklyn, New York, years later, where he was buried. His property was foreclosed upon in 1820.

Julius C. Hotchkiss (1792-1825) was a blacksmith and he purchased the building in 1824. Julius’ parents, Stephen and Mary Hotchkiss, both held tavern licenses and he naturally took up the family profession. Records show that in 1824, the newly formed Burlington militia met at the “public house” of Julius Hotchkiss. At that time liquor could only be legally obtained through licensed operators. Tavern licenses were granted to people of high standards who could be relied upon to keep order and guard against drunkenness, gambling and other vices that were prohibited by State law. In exchange for the highly profitable business of selling alcoholic beverages the tavern keeper was required to offer overnight accommodations. The minimum requirement: one bed and a barn to shelter two horses. Taverns became an important factor in the social and political life of rural areas such as Burlington, as people gathered there to exchange news and discuss business. Many taverns were mail stops, and they might have had the only newspaper available in town. 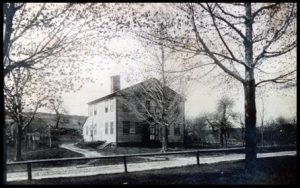 Julius Hotchkiss lived at the Tavern for only a short time. He was found dead in the barn, which is no longer standing, behind the house in 1825. His first wife Harriet Gaylord (1796-1820) died five years before him and their only child Lucia (1817-1818) died before her. Little is known of his subsequent marriage, but his second wife Laura Cook Hotchkiss, continued to live in the Tavern through a “widow’s dower” (essentially a 1/3 share of the Tavern) laid out in her husband’s will.

In 1826, the remaining 2/3 share in the building was sold to Ira Mason (1795-1877). Ira continued to run the establishment as a Tavern and Laura Cook Hotchkiss continued to live in her part of the building. She eventually sold her share to Martin Hale in 1832. Martin sold his share to Frederick Bull (1799-1872), who was married to Ira’s sister Mary Mason Bull (1805-1853), so the “dower’s share” was finally transferred to Ira Mason. It is believed that Fredrick and Mary Bull lived in the Tavern with the Masons until 1839. The 1830 census shows eleven people living in the same household; the 1840 census includes ten people.

During the 1820s a temperance (no alcohol) movement became widespread in Connecticut and throughout the world. According to a descendent of Ira Mason, the Tavern was run as a “temperance tavern” beginning in 1844. Ira’s livelihood then certainly changed, and not for the better. His fate became the same as that of Giles Griswold – he, too, was foreclosed upon, and he moved his family out of the state in 1852.

The property passed to James F. Henderson and then, in 1854, it was transferred to Romeo Elton (1817-1889). The property description includes “one acre more or less, a dwelling house, old store and old buildings thereon.” Romeo purchased an adjacent parcel of land from Martha and Dennis Upson in order to build another barn. It is believed that he also ran the premises as a temperance tavern. Tavern licenses were not issued to those who did not sell liquor in their establishments and no tavern license is on record for the building at that time. Romeo Elton was a well-regarded citizen, serving through the years as Town Clerk, Treasurer and Probate Judge for the town of Burlington. It may be that the additional income from these occupations contributed to long successful run of the Tavern under Romeo’s ownership. Romeo Elton lived in the building until the end of his life. It is due to his residency being the longest in the building’s history that it has become known as the Elton Tavern.

By the 1870s, stagecoach travel had gone out of favor in Connecticut. Railroads could carry passengers and goods more quickly and in superior comfort. As the early 1900s ushered in the automobile era, taverns and roadside inns were again sought out after a period of relative neglect. Travelers sought rooms and refreshment after traveling in their vehicles.

Philander Booth (1834-1920) was known as an “electrical inventor.” He acquired the property in 1890, when it became known as the “Colonial Inn.” His wife Eleanor Redman Shepard Booth (1836-1922) had two children from a prior marriage and together they had two more daughters, Flora (1869-1945) and Inez. Records are not too clear as when the premises ceased to be run as an inn. Upon Philander’s death the property passed to his married daughter Inez Booth Alderman (1878-1960). Upon Inez’s death it passed to her married daughter Leone L. Alderman Johnson (1896-1971), wife of WWII veteran Hilge M. Johnson (1895-1958).

Hilge and Leone Alderman Johnson had four children: Arthur E., Redfield, Shirley and Marjory. Shirley Johnson (1920-2005) married John L. Tibbetts and they made their home at the Tavern with their four children: John L. Jr., Donna (Hammond), Marcia (Scheidel) and Linda (Winebrenner). After the sale of the Tavern, John L. Tibbetts Sr. lived with his son John L. Jr. on a piece of land that was once part of the original property, directly behind the Tavern, until his death in December, 2014. He was chosen to be one of the Grand Marshals of the Town of Burlington’s Bicentennial Celebration in 2006. 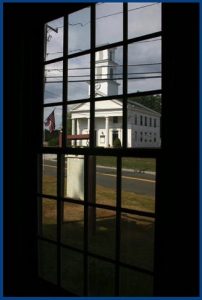 The Johnson and Tibbetts families were the last to live in the Tavern before the Town of Burlington purchased it with the help of the Burlington Historical Society in 1974 from the estate of Leone L. Johnson. No public funds were used for the purchase. Even though the Historical Society had only $68.00 in its treasury at the time, the members pursued the purchase and, after much travail, they were successful. Their intent was to restore the property and preserve it as a museum.

The property was purchased for $32,000 with the assistance of a federal matching grant through the U. S. Department of Housing and Urban Development (HUD). The total cost of the project was $70,000, which included the restoration of the building. Many volunteers and trades people rolled up their sleeves and went to work; much sweat equity was expended. Additional monies came from the State Historic Commission Restoration Fund, the Howard and Bush Foundation, John G. Martin, and a door-to-door canvassing campaign. The Society struggled to raise the funds, which, along with all the volunteer work was finally enough to complete the restoration of the property and honor the deed restrictions required by HUD. The Society also entered into a long-term lease agreement with the Town of Burlington and it agreed to be responsible for the maintenance of the building.

In 1975 the Elton Tavern was registered as a National Historic Landmark. The Burlington Historical Society continues to preserve and maintain the building for the town through grants, fundraising events, rentals, and donations. The Society has received a number of grants for the purpose of improving public access to this historic structure. In 2009, a $250,000 building addition was completed. It included a ramp for handicapped access, handicap accessible restrooms, a catering kitchen, an office and a ground floor meeting space. The grant-funded work finished in 2014 included structural repairs to the ballroom ceiling, plaster repair, bringing electrical work up to code, and resolving longtime drainage problems. These projects were further milestones in maintaining the Elton Tavern as an historic resource for the entire community, and in securing its viability for future generations.

The Elton Tavern is open for community and special events throughout the year. Check our Events calendar for public hours.